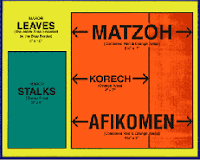 
This confirms my position when it comes to Hilchos Eruvin that the baseline halacha is according to R' Chaim No'eh's shiurim. One can be machmir like the Chazon Ish, but not employ his shiurim l'kulla.

An eggy history mystery has been put back together again in the City of David, just in time for the Seder.

Eggshells from the First Temple period were found during archaeological excavations in the City of David in Jerusalem, and were recently put back together again by Prof. Zohar Amar from Bar-Ilan University.
Found by Dr. Eilat Mazar about a decade ago, the eggshells are a rare find as organic material usually disintegrates with time. They also shed light on the eating habits
Using an algorithm developed by the Israel Antiquities Authority's Dr. Avshalom Karasik to rebuild pottery vessels, Amar found that the egg fragments enjoyed by the people of Israel during the First Temple period showed that eggs then were the same size as the eggs we enjoy today on the Seder table, where hard-boiled eggs are a traditional food.
Unless contaminated by blood,chicken eggs are usually kosher and humans have been eating eggs since the animal was domesticated roughly eight thousand years ago.
The egg is also used in Jewish law to measure legal volumes, referred in Talmudic discussion as the measurement of a kabeytza (an egg). A portion that is roughly a mouthful, the measurement is meant to answer questions about when blessings should be said after foods and how much food must be eaten in special events like the Seder meal.
Talmudic scholars debate if the "mouthful" portion is an egg, half an egg, an olive, or two olives.
The Romans approached chickens from a very different perspective to the one taken by Jewish culture. The historian Livy [Titus Livius] described how the Romans would consult with sacred chickens before going to battle. If the chickens would eat their food with relish the omen was good, if they declined it was thought best not to go into battle.


Further findings regarding the chicken eggs from the City of David will be presented in May during a special academic conference at Bar-Ilan University regarding Agriculture in Ancient Israel.
Posted by Yosef Gavriel Bechhofer at Sunday, April 14, 2019