Posted by Yosef Gavriel Bechhofer at Wednesday, May 21, 2008 2 comments:

These are the
recollections of HaRav Yechiel Michel Shlesinger,

founder of the yeshiva Kol Torah in Yerushalayim, of HaRav Avrohom

Elya Kaplan zt'l, head of the Berlin Rabbinerseminar and a talmid of

Slobodke yeshiva, under whom he had learned. This essay was originally

published in Haderech, on the 11th Iyar 5704, for HaRav Kaplan's

twentieth yahrtzeit.From among the many talks he gave us and his many typical
sayings,

every day; which have taught me and guided me.

In the course of a rancorous argument among talmidim of the

Jewry, one student voiced his opinion that even the good which Zionism

Judaism -- could not justify the movement's existence if at the same

time it was preventing the multitudes from following the path to

As a case in point, the student mentioned Christianity which,

according to the Rambam at the end of his writings, also represents

one of the steps towards Moshiach, through its promulgation of

monotheism. Yet the Rambam makes it clear that for us, the religion's

Nonetheless even the sins of the wicked are instruments in the

workings of Divine providence. Just as that sinner provided merit for

many people by spreading the belief in Hashem's unity, Zionism has

also merited us with the return of lost souls.

HaRav Kaplan zt'l, heard this discussion and called the student to

heed his rebuke. The rav first declared his enthusiastic recognition

of Agudism and its path that has been charted for us by our gedolim.

Then, he absolutely contradicted the idea that it was the crime of

Christianity that was the cause of the merit of monotheism spreading,

as mentioned by the Rambam.

It is inconceivable that a sin can bring any good to the world, just

mitzvah. If Christianity brought blessing to heathens it was not

which Divine providence had prepared for him, who knows whether, at a

among the ruling classes of the world, faith in Judaism might not have

swept people's hearts and truly brought Moshiach close even then?

That individual's movement away from Judaism precipitated the most

terrible curse in the world: two thousand years of golus Edom. And

nevertheless, because he was a Jew, a ray of light went out to the

world from the Jewish soul that was within him, as the Rambam alludes.

We, small human beings who view the world in its present state where,

in our many sins, each day's curse is greater than that of the day

before, are liable to be misled by this. And for the sake of the

eternal truthfulness of the Perpetrator of great deeds, it should be

stated that a slightly sinful outlook that has penetrated the world

has stolen from us the infinite light that lies deep within Yisroel.

Then, with his enthusiastic and persuasive words, our great rebbe

taught us the basis of Judaism's outlook according to the Torah,

namely, that even the slightest aveiro, the smallest divergence from

the will of Hashem, must cause damage and bring a curse to the world,

These words, accompanied by his cheerful expression and his luminous

and pure eyes, engraved themselves deeply in our hearts and are with

us every single day, whenever we express an opinion or take any

decision in life. They were a beacon of light for me, preventing me

our errant brothers is the construction of Eretz Yisroel.

No! It is not happening because of the sinners but in spite of the

sinners. Even in the circles that are closest to us there is a need

evening. Everything that is being built today in Eretz Yisroel is

being built because the workers are Jews, and not through their

aveiros but in spite of their aveiros. The building would be better

and greater without their sins.

From now on, when we look at what is happening, will we know and

remember the lesson of this simple outlook on life, which comes from

our holy Torah? Every slight transgression of the Torah's law, even if

fulfillment of Torah, will only bring a curse to our lives and lessen

the strengthening of Torah's light in the world.

And any distance we put between ourselves and aveiro, even the

slightest one, and any small mitzvah, even if it seems at the moment

to damage Torah and its fulfillment, influences the world for the

At this opportunity our rebbe said to us, "The Torah says, `Do not

favor them,' (Devorim) and it is forbidden to say, `How beautiful this

gentile is.' We must not even praise the outward beauty of a sinner,

so as not to be attracted to them. How much greater is the obligation

drawn after his mistaken and misleading outlook from which his deeds

And what delicacy of recognition our rebbe had. Despite his meticulous

observance of this halocho and his deep and correct understanding of

it, he never broke off his frequent practice of maintaining mutual

weak. He was inspired to this by a boundless love of Jews, which will

ultimately bring these people back to the path of good.

Looking for or to make a minyan in Banff, Shabbos Nachamu

We are planning to be in the Banff / Canmore /
Canadian
Rockies area the week after Tisha B’Av, and are looking to find any
additional
people who might want to get together to form/find a minyan for the
Shabbos of August 15-16. We know we can go to Calgary for
Shabbos, but are hoping we might find a way not to have to do that. Our
extended family group includes 6-7 males, so we are looking for 3-4
more.

Important Clarification of the CI's Chiddush in Rh"R

http://eruvonline.blogspot.com/2008/05/would-chazon-ish-have-utilized-his.html
Posted by Yosef Gavriel Bechhofer at Thursday, May 15, 2008 3 comments:

Can you explain why Rav Tzadok considers the 600,000 Mitzrim killed by the Bchoros to be a Kapara for Klal Yisrael, as stated in Pri Tzadik?

I am unable to get a clear answer to this question. Does it make sense to you, based on his other writings? So when huge numbers of people are killed, this means there was a threat to the Yidden, and they were chosen instead (as an atonement -or maybe a warning to us that we might be next?)

I know Rav Tzadok quotes the Gemorra in Brachos, where the Rav was about to enter a latrine and a Roman entered instead and was killed by a snake. "Edom Tachas Raglecho" Is there some principal here I don't understand? Will Edom eventually atone for us through their destruction? seems like a pretty violent philosophy...

I was asked a question by an unnamed Rav who didn't understand why the number 600,000 would apply to the Mitzrim, he thought that number applied only to Klal Yisrael. So I showed him that Rav Tzadok wrote they were a kapara for the 600,000 Yiddden who really did not deserve
to leave Mitrayim. The Rav didn't understand Rav Tzadok, and said he is not really an expert on Rav Tzadok, and I should ask someone who knows Rav Tzadok's writings much better than he does.

I think it is something along the lines of this Gemara, Chagigah 4b:

The Gemara later relates that the years that the person who died early lost are given to a צורבא מרבנן דמעביר במיליה.

IIRC, Rav Dessler explains that they are given specifically to a Talmid
Chochom who is kind and gracious so he will readily assign the merit he
accrues during those years to the predeceased. Here too, evidently,
there was a minyan of deaths that had to be suffered as a part of the cataclysm of the Exodus. (Likely in connection with "Halalu Ovdei Avodah Zarah v'halalu Ovdei Avodah Zarah"). R' Tzadok here (Shabbos HaGadol #1) writes that the Mitzri'im were a kofer, not a kapparah. Evidently, they were taken to fill the quota, and the resulting Kiddush Hashem (and, it would seem, the subsequent Avodas Hashem of the saved 600,000 Jews) was a zechus for the neshamos of the Egyptians.
Posted by Yosef Gavriel Bechhofer at Tuesday, May 13, 2008 No comments:

Posted by Yosef Gavriel Bechhofer at Tuesday, May 13, 2008 5 comments:

Reb Tzadok on the Geirus Controversy (sorry it's sideways!) 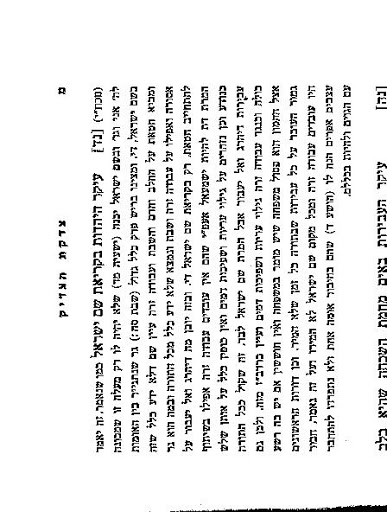 Posted by Yosef Gavriel Bechhofer at Wednesday, May 07, 2008 1 comment:

The Moshavei Leitzim I examined were more the types that involved more than one person. Generally speaking, my belief is that as to the specific individual, this is a highly subjective matter. For some people reading Harry Potter, for example, is certainly permitted recreation - perhaps even inspiration. For others it is improper an frivolous ("leitzanus'dik"). The same may be said about reading newspapers, etc. There really can be no objective standard, so long as collateral aveiros of Lo Sasuru etc. are not involved.

Does that help at all?

Dear Rabbi Bechhofer, Shalom u'vrocha,
I lived in Chicago for 7 years and attended some of your classes on Nach that you gave.
I am trying to understand more about Moshav Leitzim and to see if there is an absolute standard or if it varies by the individual person. I see that you have a tape listed on your website but am not sure how to obtain it from here (Jerusalem).
For instance, I had heard that computer games are an acceptable means of relaxation if it gives the person a needed break from their work/learning and won't become a major source of time wasting.
I also heard that the same would be true for relaxing novels that have no problems with tznius and/or hashkoffa.
On the other hand: The Mechaber mentions Books of Wars in Simon שז as Moshav Leitzim. The Magen Avraham there lists a number of other similarly forbidden activities. And the gedolim in Israel wrote in strong terms against computer games several years ago.
I started to look into the various Sheilos and Tsuvos on reading newspapers on Shabbos and how this was considered different than 'Books of Wars' but didn't end up with a clarity on the real difference.
I would appreciate any reference materials or insight that could help me to clarify the topic.
Thank you very much,
Posted by Yosef Gavriel Bechhofer at Sunday, May 04, 2008 2 comments:

Hello R. Bechoffer
I remember
listening to one of your lectures, and you mentioned that the sages did
not know science, and that not everything is in the Torah. You also
brought out The Gra's made a Sium when he finished learning sciences
of the world. Can you please provide references of the above, or if I
misunderstood what you were saying can you please clarify.


These are two separate issues. The former is issue is my own sevara -
but it is based on Avoda Zara 4b, where we see that Adam HaRishon was
not told such elementary concepts as the days becoming longer and
shorter.


The latter is in the Hakdama to Sefer Pe'as HaShulchan, written by the Gra's talmid.
Posted by Yosef Gavriel Bechhofer at Sunday, May 04, 2008 3 comments: