Video Shiur on the Three Weeks

This is a shiur I gave at Ohr Somayach on Shivah Asar b'Tammuz.

The larger the word, the more times it appears in this blog.
Posted by Yosef Gavriel Bechhofer at Sunday, July 27, 2008 No comments:

Thanks to Reuven Meir Caplan for alerting me to this!
Posted by Yosef Gavriel Bechhofer at Thursday, July 24, 2008 1 comment:

Disclaimer: I don't necessarily fully agree with everything that appears here, but it is important food for thought....

I can't say I have anything definitive to offer, but I thought it might me helpful to let you know what mistakes I have made and how I learned from them. First, I wanted to let you know that the anxieties you are going through are very familiar, I had strikingly similar questions and emotional responses. Tefilah became a major issue for me when doubts arose, and I also found it to be halting. I developed a sort of personal slogan in response: Daven Chasidish, think Litvish. Even though during most of my day I was extremely rationalistic and abhorred Emunah P'Shutah, I tried to put myself in a frame of mind of complete emotional faith when davening. I found this to be a big mistake, it was impossible (at least for me) to shut out my doubts. I also found myself subconsciously avoiding the questions I had because they became so emotionally charged I couldn't handle it. The result was a seven-year hiatus from Judaism that was extremely destructive emotionally and intellectually. I continued to avoid my questions for all that time and never found a viable replacement.

I would offer the following advice: Try to be systematic about addressing your questions. Because these questions have such emotionally volatile content it is easy to let yourself address them in a haphazard way to avoid the emotional struggle, and fear of ostracization. Write down questions, and the answers you find. Write down any weaknesses you find in the answers and similarly possible routes of future investigation. By doing this you will be able to reign in your fears and allow for more truly rational analysis. Simply trying to suppress your doubts is not the answer.

I can offer some practical advise in the means of your investigations as well. I had a conversation with a colleague who is a recent Baal Teshuvah. This individual is highly intelligent, but has had little Jewish education growing up. He is learning very quickly, but is still at a stage where he is forced to rely on Artscroll and similar outfits for translations. This has forced this individual to deal with problems he finds that have nothing to do with Judaism, and everything to do with the ideology of Orthodox English-language publishers. There is an article somewhere by Aryeh Kaplan that is a good example of what I am talking about (I couldn't find the citation unfortunately). He recounts that his son was told in cheder that to believe in aliens is apikorsus. This position was not substantiated by any thing in the Torah, but apparently seemed like pashtus to this individual. R' Kaplan zt''l wrote that this was a ridiculous and dangerous claim. If aliens landed tomorrow (although unlikely) it would force believers in this cheder-teacher's claims to abandon Judaism, even though there is nothing the Torah itself to demand it! He underlines his point by citing a Rashi that strongly implies the existence of extraterrestrial life (Shoftim Chapter 5, 23). The point he was trying to make was not that the Torah demands you believe in aliens, but rather that this teacher's claims came from ignorance, and therefore are not problems to be dealt with, but simple idiocy. I find the same to be true about claims that evolution is apikorsus or similar claims about the age of the universe).

Sorting out your doubts requires both intellectual and emotional strength, but perhaps more importantly, intellectual volition. I have often observed well-meaning rabbis attempt to sweep valid questions under the table by saying "I'll have to look into it," with no intention of doing so. Or supplying some ridiculously convoluted pilpul to be meyashev Rishonim to shitas Artscroll HaKadosh. You have to be willing to take a position sometimes, asserting that a position proposed by an individual is outside the realm of the Torah, all the while remembering that saying someone is incorrect is not tantamount to apikorsus, or a claiming that the incorrect individual is a rasha. Someone who denies you intellectual honesty and clarity for the sake of an distorted notion of eilu-v'eilu is unintentionally harming the student asking for help, the community as a whole, as well as falsifying the Torah.

There is no need to turn your critical mind off to be an Oved-H' and to have Emunah Gemurah in the truth of the Torah. I may be necessary to do so, however, to reconcile the nonsense that comes out of Artscroll and the like however. Just remember that you are beholden to the Rishonim, the Torah Sh'Beal Peh, and the Torah Sh'BeChtav, not to a well-meaning individual with a fancy hat. It is unlikely that you will find unquestionable proof of the Torah's validity, but that is really not necessary. You can't prove to me that the physical world isn't an illusion, yet you don't jump in front of moving trains. What you need to do is feel that Judaism's truth is compelling enough to live your life according to its dicta, and to find its veracity more likely than not. Emunah is a process not a status, you need to work through the ideas, it is difficult at times, but seems to be an integral part of one's struggles in this life.

The JP's Editorial puts it very succinctly: "A Celebration of Evil".

One need not hark back to the Holocaust to find examples of true evil...

Micha Berger sums it up...
Posted by Yosef Gavriel Bechhofer at Wednesday, July 16, 2008 No comments: 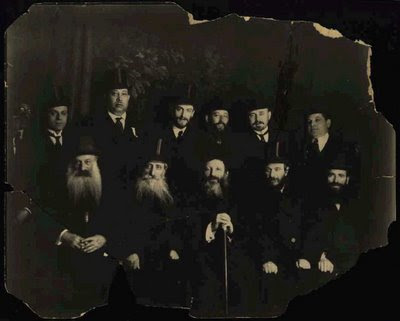 The three middle figures in the front row are, of course, the Dvar Avraham, Rav Kook, and Reb Moshe Mordechai Epstein, on their famous trip to North America, at a reception in Montreal.
Posted by Yosef Gavriel Bechhofer at Sunday, July 06, 2008 4 comments: