Perhaps because after spelling it right the first time, the next 29 times he misspelled my name with only one h, I only today stumbled on:

I am privileged to be attacked witheringly by Rabbi Dr. Yuter over the course of some 26 pages (far longer than the original essay by which I provoked his ire). It's a fun read, and the link below will lead you to a pdf of the relevant section.

I teach a course in which I have read thousands of essays of Bais Yaakov alumna over the years. They are all wonderful young  women.

But there is a pet peeve of mine I cannot forbear from critiquing.

For some reason, Bais Yaakovs teach the minority interpretation in Shiluach HaKen as if it is the primary approach.

The approach they almost invariably expound is from the Gra in Mishlei 30:17.

This approach is at direct odds with the Rambam and Ramban.

This is the Ramban, Devarim 22:6, courtesy of https://www.sefaria.org/Deuteronomy.22.6?lang=bi&with=Ramban&lang2=en:

I have a conspiracy theory as to why this seemingly educational malpractice takes place, but not for now. 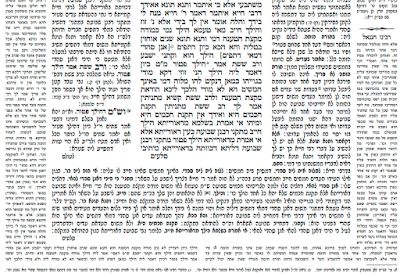 The sugya of Heileich is one of the most famous in Shas.

Equally famous is the difficult Rashi. The conventional understanding is the הילך means הי לך -here, says the borrower - presumably at hand - is the money that I owe you. But Rashi says the money is not at hand, it is elsewhere in the possession of the borrower, who never actually expended the money:

How can one say that the money still belongs to the lender? As the Gra notes, the Ran has a similar explanation, but only in regard to a pikadon, which does in fact belong to the mafkid wherever it is. 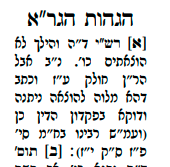 I believe that the explanation of Rashi can be found in the ראב"ן:

explained by the Even Leshem b'Dvir:

Clearly, the Ra'avan reflects Rashi's understanding. Even when it comes to a loan, the money has the status of a pikadon until actually expended!

Posted by Yosef Gavriel Bechhofer at Thursday, July 18, 2019 No comments:

Dvar Hashem MeYerushalmi, Sotah 10b and 35a

Let me open by saying I’m a big fan of your shiur in Yerushalmi, and have learned much from listening.

I’m writing in English, although Hebrew would probably be a better platform, but so be it...

The first was his explanation that the word ארד in the Yerushalmi  Sotah 10b meant עפר. Now, although the word ״ארד״ is completely cognate with the Yiddish word ערד, as you remarked in the shiur, you wondered why he would explain an apparently Aramaic word as if it was Yiddish.

However, a glance in ספר הערוך shows that the translation of the word from our Gemara (which the ערוך brings on the spot) apparently is derived from the Arabic, which is pronounced “erde.” This appears to be a cognate word, using the original language of the word to mean the same thing in another language.

The second point is not quite as straightforward, but is also a linguistic issue.

On 35a, the Gemara expounds a pasuk in Tehillim, and explains the word וגחלי as טרמנטן. The פני משה explains this as some type of cannon or rifle, sending projectiles through a tube by means of some sort of combustion. Gunpowder and projectile weapons of this sort had already been around for over 700 years in China, and about 200 years or more in Europe.

The bigger question  in my mind is, if not invoking רוח הקודש, וכו׳, how did the Gemara know about this? One might answer simply that such weaponry was not completely unknown at that time... gunpowder is not difficult to make, and it’s not far fetched to imagine that the principles had been discovered and lost over time.

As the בבלי mentioned, one of the three methods of discovery is סוד ה׳ לראיו, and when dealing with that generation, nothing would surprise me. Moreover, one could even speculate that the account of the defeat of the five Kings in בראשית might have been vis some sort of projectile weaponry as hinted in מדרש.

Of course, this is all conjecture, but I’m still looking for earlier sources that might shed some light...

Thanks for listening...
Yakov Greenstein

Posted by Yosef Gavriel Bechhofer at Thursday, July 18, 2019 No comments:

This is probably the last in the series. A lot of good stuff from Rav Tzuriel shlita. As noted by Meir, the correspondence between the disappearance of shedim and the extinction of bas kol is suggested in the Emes l'Yaakov. See Rabbi Gil Student's article at
http://www.aishdas.org/documents/mesukim/vaeira.pdf

Posted by Yosef Gavriel Bechhofer at Wednesday, July 17, 2019 No comments:

Posted by Yosef Gavriel Bechhofer at Wednesday, July 17, 2019 No comments:

The Sefer HaBris maintains that ואהבת לרעך כמוך is universal principle pertaining to almost all of mankind. This shiur learns his words "inside."

The text for the shiur may be found at

Who was the author and what is the Sefer HaBris?

People Of The Book: Classic Works Of The Jewish Tradition

Two hundred years ago, Sefer HaBrit was a fixture in the library of every educated Jewish home. First published anonymously in 1797, this hugely popular 800-page tome appeared in 40 editions, including translations into Ladino and Yiddish. It was widely read by Ashkenazim and Sephardim, western and eastern European Jews, chassidim, mitnagdim, and maskilim with equal enthusiasm.

(see the link for the rest of the article)
Posted by Yosef Gavriel Bechhofer at Monday, July 08, 2019 10 comments:

Posted by Yosef Gavriel Bechhofer at Monday, July 08, 2019 No comments:

Posted by Yosef Gavriel Bechhofer at Wednesday, July 03, 2019 No comments: