These are not "Charedi" Jews. They are not even "Orthodox" Jews. They are, however, an embarrassment and a shame that brings calumny on other good people who, by dint of similar garb, are associated with them.

I referred to these posts in the course of a chevrusa today. And I found a comment on the latter one that I did not notice previously:


Hi, I have used this understanding of Kavua before, it is quite elegant. However how does it fit with the Kavua of the mouse in Pesachim which just came up in Daf Yomi?

This sugya is cited by Prof. Moshe Koppel (cited, in passing, in the second blog post above) in his essay at http://etzion.org.il/en/principle-kavua:

The gemara (9b) discusses a scenario where nine piles of matza and one pile of chametz are lying around before Pesach. A mouse comes and takes a piece from one of the piles and enters a house. However, we do not know if it took chametz or matza and thus are in doubt whether the house must be checked once again for chametz. The gemara distinguishes between a case where the mouse is seen taking a piece directly from one of the piles ["kavu'a"] and an instance where the piece snatched by the mouse was first isolated from the piles ["parish"]. These two cases are said to be analogous, respectively, to two cases considered in Ketubot (15a): "If there are nine stores which sell kosher meat and one which sells non-kosher meat and someone took [meat] from one of them but he doesn't know from which one he took, the meat is forbidden. But if [a piece of meat] is found [not in a store], follow the majority." Thus if the majority of stores from which the meat might have originated are kosher, the meat is permitted.

The question is a good question: Where is the "moral hazard" in the case of the mouse?

I think the answer may be found in a word in the Rambam (Chametz u'Matza 2:10). The Rambam does not understand the case as one in which piles are just "lying around." He begins the halacha with the word heini'ach - he placed.

I would suggest that it is the involvement of the owner of the house that places him in a situation of "moral hazard."

There is another possibility, not as elegant, that this case is different because the owner will be compelled (or not) to redo Bedikas Chametz. Accordingly, his "negi'ah" is his "moral hazard."
Posted by Yosef Gavriel Bechhofer at Wednesday, November 16, 2016 13 comments:

From Another McMullen Supporter

The election results are very depressing for a Hirschian like me. Please look at these paragraphs from a NY Times article about the Orthodox Jewish vote in Brooklyn:

Orthodox Judaism preaches the importance of strict moral behavior, but Mr. Stern said that he was not dissuaded by Mr. Trump’s very public peccadilloes, such as his multiple divorces and a recording of him talking about groping women.

“I think that’s not appropriate but I think he’ll handle better the situation of our country now,” Mr. Stern said. “I don’t really care that he’s not a model.”

“I don’t think people expect gentiles to follow those rules,” she said. “People are not looking to the United States president to be a representative of some sort of morality in the way that other Americans might. People are looking for a strong leader, a tough leader.”


I am also concerned about Trump's demonization of the Other. Many of our people feel comfortable knowing that Jews weren't among the groups he demonized. Is that reflective of the Torah ethic: until they come for you, don't worry about anyone else?
I would be grateful for any thoughts about this matter. Thank you.


I did see a similar statement condemning Trump signed by 40 Orthodox leaders but they are almost exclusively of the Open Orthodox variety. What happened to the Hirschians? 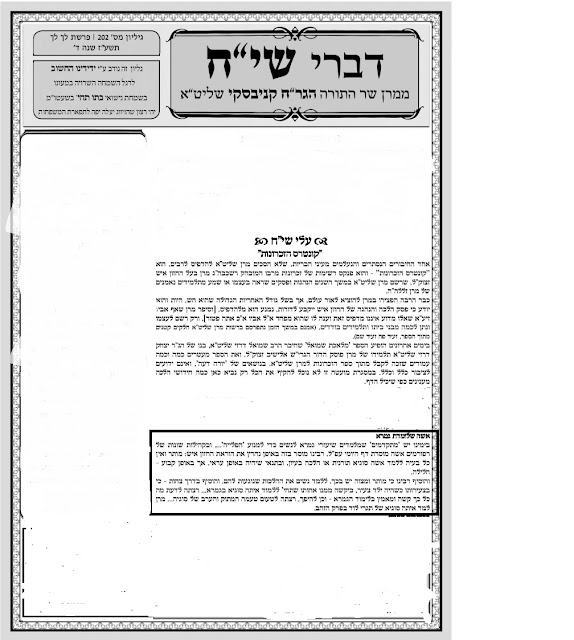 FDR famously said that “We have nothing to fear but fear itself.” Well, this is ample reason to fear this election, as it is all about fear. Many (if not most) people are voting out of fear: Fear of what the other candidate will do if he or she is elected president, fear for the future of the nation under his or her administration.

Orthodox Jewry in America is split on the elections – often vehemently so. Yet, while many of those who have bought into the “Crooked Hillary” narrative are pulling out all stops in their support of Mr. Trump, it is almost never on account of their like of Mr. Trump (although some do like Ivanka, as at least a nominally Orthodox Jew), but their fear of Mrs. Clinton. They remember some overtures she made, long ago, to Arab opponents of the State of Israel (most infamouly, her 1999 kiss of Suha Arafat), and fear she will double-cross the Jewish state.

This fear drives many Orthodox Jews to the Republican candidate, notwithstanding any personal sordidness. That Mr. Trump is not authentically religious, and that his support of certain Christian positions is of recent vintage and entirely self-serving, does not escape them, but this is not enough to prevent them from voting for him. Furthermore, some of these supporters of Trump believe – or at least hope – that in the end, it will be Mike Pence who actually governs. Thus, they are voting more for Mr. Pence than for Mr. Trump.

On the other hand, many Orthodox Jews are afraid of Mr. Trump. Mr. Trump seems to attract to his banner several fringe groups, some of which are blatantly anti-Semitic. He is seen as a coarse, boorish lout with no intrinsic sense of morality, ethics – not even common courtesy. He has actually made (albeit during the primaries) statements regarding Israel that are more controversial than any statements that Mrs. Clinton has made, such as his pledge, back in February, to remain “neutral” on the Israeli-Palestinian conflict.

When individuals from both sides of this great divide learn that I plan on voting for Mr. McMullin, their main complaint against me is that I am wasting my vote.

But I believe it is amoral to vote for a candidate whom you feel is wrong for America as the lesser among two fears. I think it is unethical to support an unethical candidate for pragmatic reasons. As a religious person, I believe that God would want us to support someone we perceive as a good person, representing a good cause, even if that person and that cause will lose this round. As Jews, we have persevered throughout history on precisely such principles, with faith that, as in the movies, good will triumph in the end. This side of the coin is a case for the here and now, for a “real time” positive choice of a candidacy that may do us proud, as opposed to a negative choice of which side will embarrass us less.

Moreover, recent history shows that on January 21, 2017 – if not on November 9, 2016 – this country will begin looking ahead to 2020. I sense that regardless of whether we wake up that morning to a President Clinton or a President Trump, we will begin hoping for a redemptive election next time around. Even in losing, a candidate can establish him or her self as a viable and serious option for next time around. Even in losing, a movement based on idealism and (hopefully!) refinement can be brought into existence, one that will reclaim America’s mission and manifest destiny.

I intend to vote for Evan McMullin and Mindy Finn (who are write-in candidates in my state of New York) because I believe a vote of conscience – even if it only a protest vote – is, in my emphatic opinion, never wasted. Indeed, when I explored my son’s suggestion and decided to vote for Mr. McMullin, I had no idea of the “Utah option” that suggests that if Mr. McMullin wins his home state of Utah he might prevent both major candidates from reaching the decisive 270 electoral votes, thus throwing the election to the House of Representatives, who might select Mr. McMullin as the next president.

While I do not necessarily agree with Mr. McMullin and Ms. Finn on all the issues, in this election they represent most closely my ideal of a national leadership of which this nation could be proud. They could be positive role models in morality, ethics and idealism. In contrast to the electioneering of the major candidates, they manifest civility and refrain from vulgarity.

I will try this zman to be more regular!

The Rambam in the 14th perek of Hilchos Issurei Bi'ah
rules that a Jew who acquires a non-Jewish slave from a non-Jew must
convert him to Judaism in a manner similar to a ger tzedek
(albeit the conversion does not result in the slave having full
Jewish status, but rather the unique status of an eved kena'ani).
The conversion requires the slave's consent. If the slave does not
consent, the Jew can keep him as a slave for twelve months, during
which time he can attempt to persuade the slave to convert. If his
efforts prove futile, at the end of the twelve months the Jew must
sell the slave back to a non-Jew.

However, continues the Rambam, if as condition of the original
purchase, the Jewish owner and the non-Jewish slave came to an
agreement that slave would not undergo a full conversion (i.e., he
would not undergo milah and  tevilah), but would
take upon himself the commitments of a ger toshav (which
are, more or less, congruent with seven mitzvos bnei Noach),
then the slave can serve the Jew in that capacity for as long as the
arrangement continues.

This option does not appear in the Bavli.

The Ridbaz suggests that the source for the condition of ger
toshav being an option is the Yerushalmi here. He
explains in this manner a cryptic line in the Gemara that reads Eved
toshav l'olam, ger v'toshav harei hu k'goy l'kol davar. The
Ridbaz punctuates and explains the Gemara as follows: Eved
toshav - if one acquired  a non-Jewish slave on the condition
that he be an eved toshav (i.e., a slave that has the
status of a ger toshav) - l'olam - he may remain
with the Jew indefinitely. Ger - but if no such condition
was made, then the assumption is that the slave was acquired  in the
normal manner, which requires the slave to undergo the full
conversion of a ger tzedek. In that case, if the slave
refuses to convert - even if he subsequently agrees to undertake the
commitments of a [ger] toshav -  harei hu k'goy - he
may not be kept by the Jew, and after twelve months reverts to being
fully non-Jewish.

Posted by Yosef Gavriel Bechhofer at Tuesday, November 01, 2016 No comments: