A talk given Erev Shabbos Shirah:


Synopsis by one of the listeners:

This week is Shabbos Shira, the week when the Jewish People sang Shiras HaYam to Hashem after witnessing the miracles of Kriyas Yam Suf (the splitting of the Red Sea). In Jewish Tradition, there are many types of shira (song) that are discussed, and specifically shira is broken down into 2 categories: those with words and those without. Shira without words is often said to focus on emotion, using the tune itself to transport the singer, with shira with words is said to be more of an intellectual experience, connecting to Hashem through the words while using the tune as a vehicle. Even a shira without words, though, brings emotion: sadness, happiness, etc.

Since shira has tremendous power to affect our emotions, we need to be careful with the type of music we listen to. Music that has inappropriate language, lyrics, or even a tune that was composed with the intent of bringing out its listener's negative nature is music we should distance ourselves from. Music has a real impact on one's soul!

The GR"A famously said that of all the secular (non-Torah related) knowledge he mastered, the most important to understand was the knowledge of music. He felt that in order to properly understand Torah, one also had to have an understanding of music. In fact, we see that Elisha, when he was trying to achieve nevuah (prophesy), asked for instruments to be played before him. In the Beis Hamikdash (Holy Temple), the instruments played by the Leviim (Levites) were so crucial to the avodah (service)!

When we listen to music, especially with instruments, it's a very powerful experience. The medrash says that techiyas hameisim (revival of the dead)will be accomplished through music, and Chazal (our Rabbis) say that the world of teshuva (repentance) is next to the world of niggun (song). By hearing this song (we don't know what exactly it is, of course), the soul will be inspired to repentance, and thus deserve to be resurrected.

In this week's parasha we see the first shira. Shira is meant to help us connect to Hashem, to inspire us to reach higher and achieve spiritual closeness! May we all be zoche(worthy) to use our musical capacity to grow in our avodas Hashem (service of G-d), talmud Torah (learning Torah), and shmiras hamitzvos (keeping of the commandments)!
Posted by Yosef Gavriel Bechhofer at Friday, January 26, 2018 No comments:

First in a series. Eventually I will be making an appearance, among others...
Posted by Yosef Gavriel Bechhofer at Friday, January 26, 2018 1 comment:

Dr. Robert Appleson’s book, Patterns on Parchment – The Structural Unity of The Five Books of Moses, is not easy reading for me – he is a person of mathematics, and I am a person of the humanities and the social sciences. Yet it is a powerful weapon in the arsenal with which Torah Judaism wages the war against the Documentary Hypothesis.

To whit, if there can be established recurring patterns throughout the five books of the Torah, the case that the work is the product of a single author is greatly strengthened. If those patterns are intricate and complex, the case is readily made that the Author was divine.

In part of the book Dr. Appleson illustrates the problems of the Documentary Hypothesis, including the elucidation of the great 19th century scholar and Gadol b’Torah Rabbi David Zvi Hoffmann zt”l, the rector of the Hildesheimer Seminary in Berlin (and predecessor of my personal hero, Rabbi Avraham Eliyahu Kaplan zt”l).

Other mathematicians have tried to demonstrate the intricacies of the Torah’s patterns via the Bible Codes. Dr. Appleson focuses not on the patterns of letters, but on patterns of themes.

The key, to discerning the recurring themes, is an understanding of the little-studied structure of parshiyos pesuchos (sections of Torah that end with a gap from the last letter of the section until the end of the line of text – with the next section beginning on the next line) and parshiyos situmos (sections of the Torah that end with a gap of nine letters between the end of the section and the beginning of the next session – which thus begins on the same line).

Dr. Appleson’s work is an elaboration and expansion of builds on the work of Rabbi Yehoshua Honigwachs in his 1991 book The Unity of Torah. Rabbi Honigwachs proposed an organizing principle based on five thematic links within the Ten Commandments. Dr. Appleson calls these links, which emerge from the Midrash Halachah known as the Mechilta, “Shared Principles.”

Taking the position that parshiyos pesuchos are primary sections, while parshiyos situmos are subsections, Dr. Appleson demonstrates that the principles recur in discernible, consistent patterns throughout the Torah.

While Dr. Appleson would be the first to admit that no one approach refutes the Documentary Hypothesis in and of itself, this book goes far in highlighting the unity of the Torah. Indeed, even were one to just gain the insights into the parshiyos pesuchos and situmos developed in the work, one would emerge greatly edified from the perusal of ,Patterns on Parchment – The Structural Unity of The Five Books of Moses.

Posted by Yosef Gavriel Bechhofer at Monday, January 22, 2018 No comments: 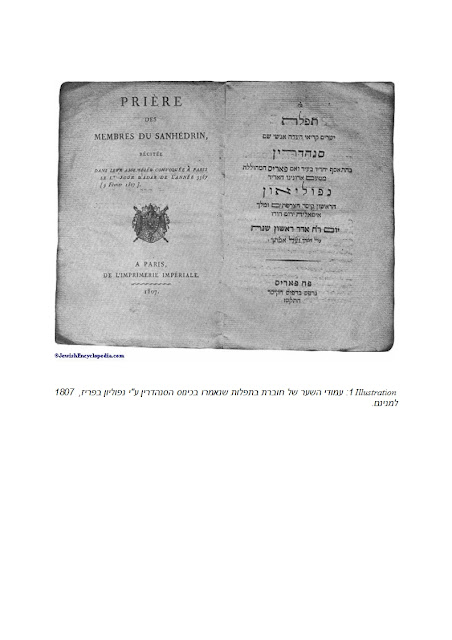 A student asked me about Napoleon's Sanhedrin, and goaded me to look for a paper I wrote in 1987. I could only find part 2, which constitutes the three images in this post. This eventually became, with major modifications, this Hebrew paper: 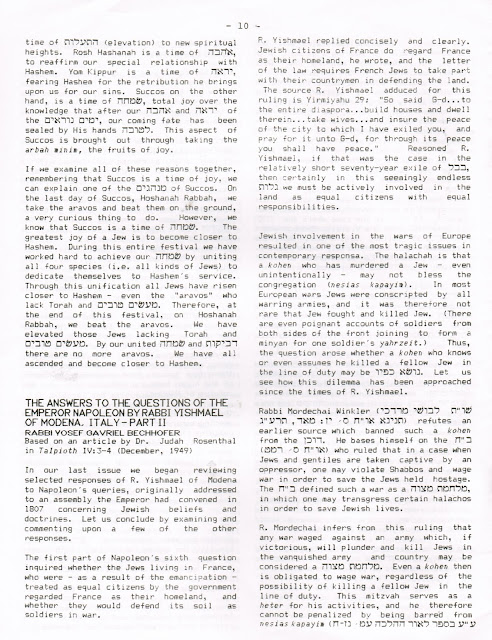 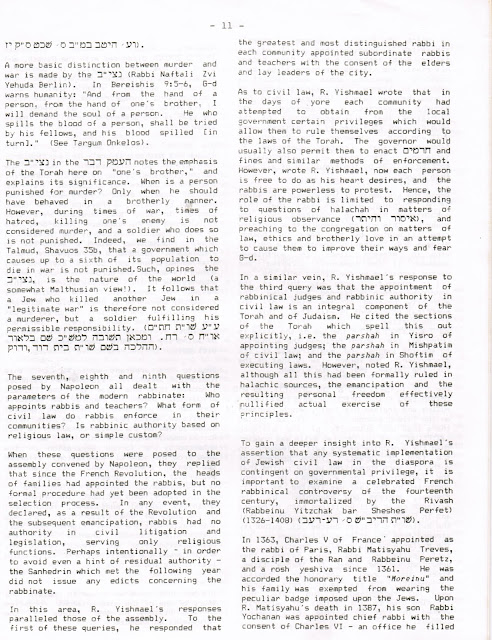 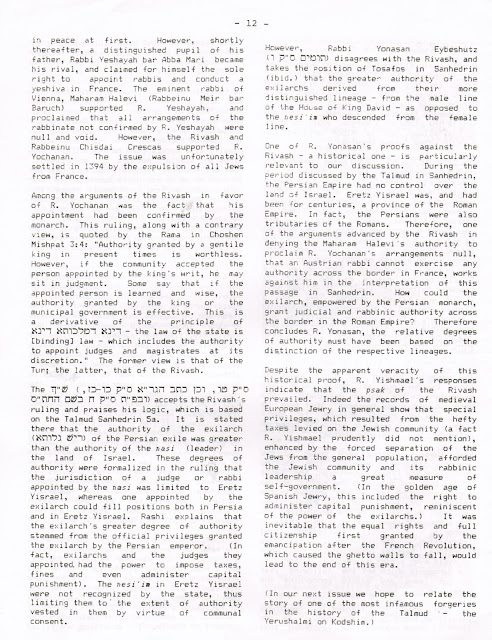 Posted by Yosef Gavriel Bechhofer at Wednesday, January 17, 2018 No comments:

January 12, 2018
Halachos of Birchas Hagomel --- Rubashkin: is all the celebrating appropriate?

with Rabbi Yehoshua Pfeffer - Dayan in Yerushalayim, Rav in Ramot - 14:25 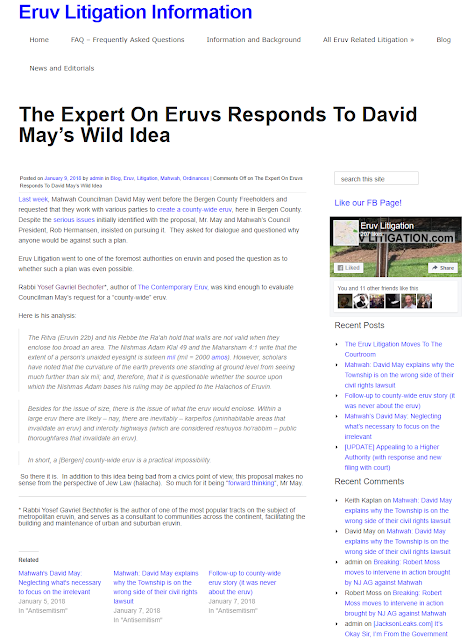 Posted by Yosef Gavriel Bechhofer at Tuesday, January 09, 2018 No comments:

See the notes below.

I was wrong about the Netziv.
In שו"ת משיב דבר חלק א סימן ט he is stringent.
The reference should have been to the Aruch LaNer, R' Yaakov Ettlinger,
in an 1861 teshuva:
שו" ת בנין ציון החדשות כג﻿

Posted by Yosef Gavriel Bechhofer at Monday, January 01, 2018 No comments: