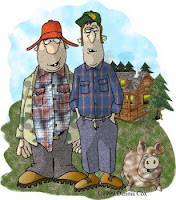 Limit all U.S. politicians to two terms..
One in office
One in prison
Detroit and Chicago already do this.
Posted by Yosef Gavriel Bechhofer at Wednesday, June 23, 2010 No comments:

Some Comments on the Emanuel Issue

Click here and here you can scroll through and down to several comments I made in the conversation on RHM's blog on the topic:


The actual links are:

Possibly the Best Speech I Have Ever Heard!

A Reason to Admire the Rebbe: Thoughts on the LR's Yahrzeit

Whatever issues that one may have with Chabad - and there are legitimate issues - the Rebbe stands out as unique. Not in the story's implied mofeis that the Rebbe caused Frankl's book to be published and impact upon the world. In Yahadus, mofesim are nice, but insignificant.

Rather, it is the Rebbe's insight that Frankl was important (and he was!), that his philosophy-psychology was beneficial to the world (and it is!), that Chochmoh ba'Goyim [or Frei Yidden] ta'amin (too rarely admitted, and even more rarely encouraged!), that one need be concerned beyond one's "hoif" or "yeshiva" for the benefit of humanity - these are rare qualities even among our leaders.

Were it but for this alone, the Rebbe deserves our admiration - not our devotion, that is for Chabadniks, not for us - but our appreciation.

Posted by Yosef Gavriel Bechhofer at Tuesday, June 15, 2010 No comments:

Some Thoughts on Chinuch

Last Thursday night, I attended my daughter's graduation from the Azrieli Graduate School. The guest speaker was the always inspiring Rabbi Abraham J. Twerski. I would like to share some specific points that he elaborated, as well as my own ruminations during his presentation.

1.He cited the Gemara (Sanhedrin 19b) that anyone who teaches his friend's child Torah, Scripture "places upon him" (ma'aleh alav ha'kasuv) as if he brought this child into the world (k'illu yelado). He explained that once a person accepts upon himself the mission of teaching Torah to the children of his fellow Jews, he bears the same responsibility for them that a father bears for his own child. The statement is thus not just a promise of reward (as it is customarily understood), but an assignment of acharayus.

3. He expounded upon the level of that simchah. He based it upon the phrase in davening that we frequently recite but rarely consider: Ashreinu mah tov chelkeinu u'mah na'im goraleinu. He highlighted the term goraleinu, and its intrinsic connection to the word goral and its permutation as hagralah - a lottery. The Simchah of a Torah life and of Talmud Torah must be at least on a par with the Simchah of winning a lottery! Anything less than that level of Simchah falls short of the acharayus of both parents and Mechanchim.

4. He bemoaned the prevalent lack of such Simchah and the accompanying lack of Mechanchim who impart such Simchah. He identified the following specific phenomenon as a manifestation of this problem: Seventy years ago, when his brothers were learning in Torah Vodaas, were you to ask them where they were learning, they would reply, "by Reb Shlomo [Heiman]." Similarly, were you to ask a bachur learning in Lakewood where he was learning, he would reply, "by Reb Aharon [Kotler]; a bachur learning in Yeshivas Rabbeinu Yitzchak Elchanan would answer, "by the Rov." Today, the same bachurim would answer, "in Torah Vodaas," "in Lakewood" and "in YU." Teaching and learning was once personal and experiential, whereas today it is largely impersonal and institutional. This change is reflected in the "by-in" change in expression. The Simchah that is generated by, inherent in, and imparted by Hiskashrus is no longer prevalent. Yet that is the core of Chinuch and of our role as Mechanchim.

5. Although the connection may not be obvious, as he was speaking there flashed in my own mind the derivation of the term chinuch. The shoresh of chinuch is ches-nun-chaf. The ches-nun is the word chen. It seems to me that this refers to the chen that Torah imparts to those who learn it (Eruvin 54a; Kesuvos 77b). Much more important than imparting the data, and perhaps even the skills, of Torah is the imparting of the chen of Torah - the same essence that is at the core of the Simchah of Talmud Torah. This is accomplished by the Chaf Ha'Dimayon - the Mechanech modeling that Chen and that Simchah, for the Talmid to acquire by Hisdamus - assimilation and emulation.

[6. I think that many three-letter shorashim that are built on the ches-nun combination can be explained in a similar vein. Just one example: ches-nun-peh, chanef, a sycophant is someone whose chen is only b'peh and not b'lev.]

7. In a search for sources, I came across this beautiful passage in the Kav HaYashar (Chap. 58) that expresses these ideas succinctly: