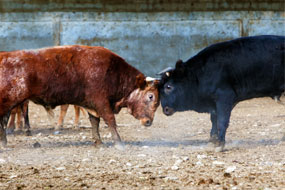 Guest Post by Reb Ben Rothke of Passaic. Note that I don't necessarily agree with everything in his essay, but it is a fine and important piece that should serve as a springboard for conversation.

I try to avoid political posts, but it must be remarked that evidently there is a dearth of responsible adults - rabbis and parents - in the Peleg HaYerushalmi.

R' Gedalia Nadel's Explanation of Kavua, Similar to Prof. Aumann's "Moral Hazard" Theory of Kavua, And A Note from Myself

Upon my sending him my Toras Purim 5762-5767,  a talmid (now a great talmid chochom) sent me the following:

I happen to remember a few small bits and pieces of things that I heard from you at the end of your Purim Seudos between תשנז-ט.

I suspect that you probably were too drunk to remember what you had said so I thought I would write it down.  Maybe you’ll remember how to fill in the pieces.

One year you talked about ותלבש אסתר מלכות. That according to the Sefarim HaKedoshim this is Middas Malchus.  You then described Middas Malchus as a periscope. However, I don’t remember hearing what you meant by that.

One year you talked about the Gr”a about the kadma vazla on נערה ונערה  as opposed to the munachim on תר אסתר בת אביחל you explained that the middah of a Jew is to do everything במתינות in order to be sure that it is Ratzon Hashem.

You connected this to a Yerushalmi in Orlah about a tree that was mostly uprooted from  the ground but was still connected by a small root how thick must that root be. There was a de'ah that also describes the root with a world related to מתון.

You then explained how this is based on the mitzvah of orlah and connected it to the pesukim שלש שנים יהיה ערלים.

And I think you explained that this was a broad message to every Jew for the מתינות   before all actions to make sure they are Ratzon Hashem.

Have a Good Shabbos and a Freilichin Purim.

New note: One can link matanos with metinus!
Posted by Yosef Gavriel Bechhofer at Friday, March 10, 2017 No comments:

Reb Tzadok (DoverTzedek) 33b writes that nevuah is an hisgabrus of binah in the the heart. Nevuah is a form of hisbonenus that grants perception through a clearly intuited perception. Which is why a navi was also called a ro'eh. Shevet Yissaschar was granted binah lo'ittim, to intuit a perception of the seasons - the ittim - so as to know when to be me'abber shanim.

But in a world of ittim, the epochs of time control and ordain the events, which is why there are ittos l'tzarah, Which is why ידעי העתים in gimatriya equals המן בן המדתא האגגי! Haman was a wonderful menachesh who was an expert at ascertaining ittim. Therefore the Melech - Melech Malchei HaMelachim - says we are going to commence on a new epoch with a new hanhagah. We will dispense with the yodei ho'ittim and commence with ידעי דת ודין - who are, in gimatriya בית יוסף - the Beis Yosef Lehavah that is the precondition to the destruction of Esav - and the eradication of Amalek. These are the sages of Torah she'b'al peh, the Chachamim. As we have said, das v'din in gimatriya is da'as - and thus a chacham is adif me'navi - in that, although da'as is a lower sefirah than binah, it is more complete, as it rests on both chochmoh and binah. And a special power is granted to chachamim. They have the capacity to transcend ittim, into the realm of the Rambam's indivisible time, and be mazmin a zman that is l'ma'alah min ha'shemesh (למעלה מן השמש in gimatryia equals המלך אחשורוש telling us that transcending time is the way to free ourselves from Achashverosh).

This capacity to transcend and impose our authority on time is what makes Purim - specifically - timeless. וזכרם לא יסוף מזרעם.

And now we can understand the Likkutei Maharil quoted in the Ta'amei HaMinhagim p. 378:

and the Imrei Emes:

And, we conclude, for now with the following:

If Purim is all about the transfer from Binah to Da'as, why is the Mitzvas HaYom to attain Ad d'Lo Yada?

The answer lies in a Tanna d'Bei Eliyahu:

By Purim, we must say:

so much more can be said!

Posted by Yosef Gavriel Bechhofer at Friday, March 10, 2017 No comments:

By now we understand that an eis is a specific major or minor epoch in time that can be identified by phenomena. The 28 ittim are times when specific hashpo'os are mashpi'a the world. As the Ramchal writes in Da'as Tevunos:

In the Purim story, Haman seeks the eis that will be an eis tzarah for the Jews. He seeks that by a pur that is a goral - a destined - a predestined eis.

Mordechai recognizes that the haspo'oh and hashgochoh is in the throes of a very precarious eis.

Haman finds every time he sees Mordechai to be an eis of great frustration.

When the decrees are issued countermanding Haman's decree it is certainly an eis of salvation.

And, of course, while not mentioned in the Megillah explicitly, the epoch in which the events took place was an eis la'asos, which is why Mordechai and Esther decreed a public fast on Pesach.

A menachesh also tries to find the proper eis for his purposes. That was Bilam's strength - to know the daily eis of Hashem's anger. We, on the other hand, have the eis of nevuah.

And the eis of nevuah is remarkable:

But a navi is limited to the right eis:

A Chacham has the capacity to not just discern and work with ittim, but to enact and introduce zmanim. He is mazmin the zman. Which is why in all the time of Nevu'ah (Bayis Rishon) no new holiday was enacted. Mordechai - the head of the Sanhedrin - with the Anshei Knesses HaGedolah - introduce the first yom tov d'rabbanan. They pluck a date out of thin air and imbue it with sanctity, decree that it is eternal and that its shefa and hashpo'oh shall be everlasting. Hazmanah milsa...

Next time (bl"n), the denouement.

The word eis appears three times in the Megillah. In our pasuk it says ittim - eis times two. That makes five times eis. Five times eis in gimatriya = 2350. That is the precise equivalent of the pasuk, Bereishis 3:10:

The next pasuk is:

When we are contingent on ittim we are susceptible to Haman.

And, for some bona fide Purim Torah...

Because Azitz in gimatriya = HaMin HaEitz!
Posted by Yosef Gavriel Bechhofer at Tuesday, March 07, 2017 No comments:

The first online conference of the group, hosted and moderated by Stacey Aviva Flint. A broad range of issues were discussed , including current and ongoing concerns of discrimination and racism in the Orthodox Jewish community.

Thanks to Stacey Aviva Flint for organizing, hosting and moderating the conference with grace and aplomb!

Please watch or listen and share far and wide!

Posted by Yosef Gavriel Bechhofer at Sunday, March 05, 2017 No comments: 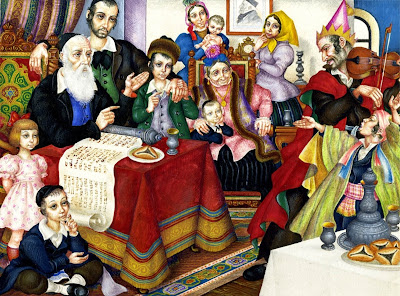 to download a pdf of all the years of Toras Purim from the blog in one file. This year not yet included. Some day I hope to make it a sefer...
Posted by Yosef Gavriel Bechhofer at Thursday, March 02, 2017 1 comment:

Other than in yod'ei ha'ittim, so far as I can tell the word eis appears in the Megillah three times:

According to the Malbim (HaCarmel), eis connotes a natural point or span of time that is manifest in nature - as opposed to a point in time determined by dos (he uses the word!) and human convention. An eis can be long: geshamim b'ittam - or short: l'eis erev.

Zman, on the other hand, is not part of an ebb and flow in the tides of natural phenomena. Although the Malbim does not state this in the cited passage, it is clear that zman and hazmanah are related.

Yom is also a set time, defined by the phenomena of night and day. There can be several ittim in a day and, conversely, many days part of a larger eis. Thus, v'al yavo b'chol eis el ha'kodesh, says the Malbim, means not even at all ittim during the day of Yom Kippur.

Moadim in the Torah are connected with ittim - seasons. Yomim Tovim d'Rabbanan are connected with zmanim - times at which events occurred independent of seasons of harvest, first fruits and gathering. Avodah Zarah and soothsaying are concerned with seasons and auspicious phenomena that indicates a fortuitous point or span of time. Atheism denies any such significance. There is only time.

If you believe in coincidences, a  mikreh is meaningless. It also has nothing to do with zman, other than that it takes place within time. But if you believe in mazal and/or hashgachah, a mikreh may very well indicate the onset of an eis.

Posted by Yosef Gavriel Bechhofer at Thursday, March 02, 2017 No comments:

I randomly opened a Megillas Esther and came upon the pasuk:

So this is the source for this year.

The Malbim says that the king told the yod'ei ha'ittim that they - the more significant judges - need not be involved in the case of Vashti, which could be handled by any yod'ei dos v'din. The Alsheich has a similar approach. So does the Maharit. The Radomsker has a interpretation al pi kabbalah from which we may draw some insight later on:

The Bnei Yissaschar brings a nice pshat from a Sefer Ma'aseh Hashem:

With this we shall come to understand why we say Eis La'asos and not Zman La'asos.

One more Hakdamah: Ittim is associated with Binah. But dos v'din in gematria is da'as.

The plot thickens...
Posted by Yosef Gavriel Bechhofer at Wednesday, March 01, 2017 No comments: